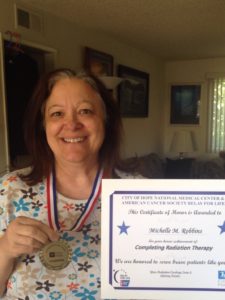 I first heard about eAssist in March of 2015 after we moved to a new city and I was suddenly out of work.  I found eAssist on one of the internet job sites and thought this would be great for me. I have always wanted to work from home, so here was my chance.  But like other eAssisters, I got nervous wondering if this was too good to be true.  I went ahead and applied and received an email from Davenee wanting to schedule an interview.  About a month later I was assigned to my first office, and then a second and a third.  In the July of 2015, I went back to work part-time for my church and had to cut back to just 1 eAssist office.  In January of 2016, I went back to working full-time again with eAssist.  Little did I know that working for eAssist at that time would change my life.
In March of 2016, I went for my regular well-woman check-up and was diagnosed with breast cancer.   It was Stage 1, early detection, but I needed surgery and 21 treatments of radiation.  I had my surgery about 15 days before the Summit in Salt Lake City, but I was determined to go and have a good time.  My doctor said I could go, but I could not lift anything, so I brought my husband to help me with my luggage.  I met some of the ladies that I worked with and talked to.  I put faces to names and voices, and I was so glad I went, even though I was having some discomfort most of the time.
In June, I started my radiation therapy.  Everyday, for a little over 4 weeks, my husband took me to my treatments.  I truly believe that if I wasn’t working for eAssist during that time, and having the freedom of making my own schedule that worked around my treatments and numerous doctor appointments, I don’t know how I could have done it with a regular 9 to 5 job.
I love working for eAssist.  I have learned so much more about dentistry that I never knew before!  The women on my teams have been so wonderful and helpful, and I have developed some lasting friendships.
I have been in the dental field since 1977.  I’ve worked in several dental offices… general, orthodontic and periodontic, and I even worked for Delta Dental of California for 16 years.  Working for eAssist, and the opportunities that I have been presented with, came to me at a time in my life when I needed it the most.  I am now a member of the SOS Team.  I love helping the various dental offices. I’ve learned new software, like Umbie and Dentrix (I only knew Softdent before now), and I’ve met new eAssisters.   I am looking forward to the Summit in Orlando!  Thank you eAssist for changing my life!
To watch Michelle’s story, click here!